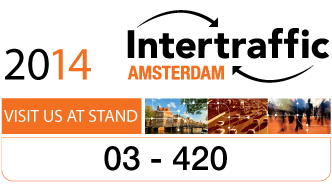 "Portuguese company EST will present its new Android application for managing a Phonepark parking place. This application allows users to manage their private parking space and they may temporarily authorise its use by other users (30 different users).

In case of parking space abuse, the owner of the space is immediately warned by sms, in the same way as the multi-user Phonepark. A new design and new features for the standard Phonepark will be shown at Intertraffi c. EST says it plans to extend the implementation of the system in other countries and it intends to fi nd new partners during the event."

Published by ITS International | Worlds Highways

EST will participate in the 2014 Intertraffic fair in Amsterdam - The Netherlands, from 25 to 28 March this year, with the objective of promoting, once again, its product Phonepark. It is the world's largest event dedicated to traffic, signage and park solutions. The fair will feature more than 800 exhibitors from around the world.

Phonepark is an innovative parking control and management system, whose goal is to make parking easier for registered users and prevent abusive parking.

Phonepark was developed in accordance with the following requirements:
• Permission to park is based on the identification of the user and not by the vehicle;
• Without cost to the user;
• Fully automated process and comfortable for the user, using the mobile phone, with no special commands or keys;
• Allows parking of emergency vehicles such as ambulances, without damaging the vehicles.

The participation in the fair will allow finding international partners for other countries.

Portugal’s EST and Epocavia is using Intertraffic for the first international showing of its phonepark parking control and management system.
The new system is designed to ease the problems of finding a parking space by registered users of a particular car park, while preventing the abuse of parking spaces that are reserved for groups such as the disabled.
A motorist can pre-register for a parking space, either by phone or in person. Each space has a telephone number allocated to it. Once registered, the motorist makes a toll-free phone call to the phone number. The particular space identifies itself to the approaching driver by a flashing light and a vertical or horizontal barrier is lowered, allowing access. The barrier rises again once the space is vacated.
Although the barriers are on a flexible mount (allowing access to the space by emergency vehicles, for example) any unauthorised vehicle pushing over the barrier triggers an alert to the car park management authority.
Any unregistered motorist calling the number will receive a message giving them the necessary details on how to register.
The system is already in use in several shopping centres in Portugal and registered users can park in any of the locations. Epocavia is now looking for international partners for other countries.

EST, in partnership with the company EPOCAVIA attended the trade fair Intertraffic 2012 in Amsterdam - The Netherlands, from 27 to 30 March, the biggest global event dedicated to traffic, signaling and parking solutions. The fair featured more than 800 exhibitors from around the world.

The participation at this fair in Amsterdam – The Netherlands, aimed the international exhibition of a new system entirely developed by EST and Epocavia, also patented and installed almost two years ago for client in Portugal: phonepark.

phonepark is a control and parking management system, which aims to facilitate parking for registered users and prevent abusive parking.

As result of its completely new character and proving the interest shown by the event, phonepark has an article in the "Preview" Magazine and in the "Daily News" Magazine, for promotion of the event.